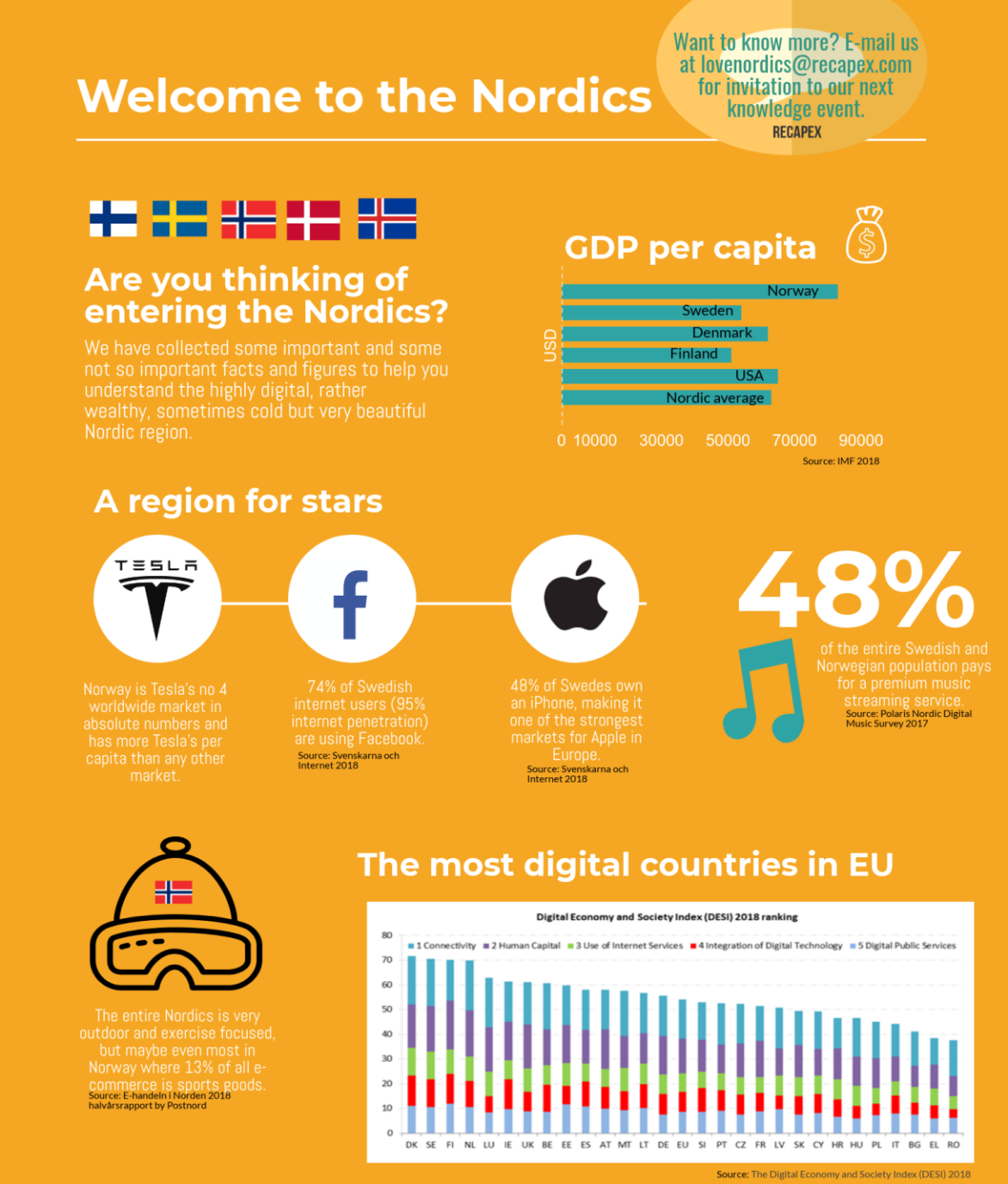 Sweden, Denmark, Norway and Finland together host some 27 million people. Small in gross numbers compared to France, Germany or the UK, but but still a hidden gem for the international companies that have successfully launched in the region. In particular consumer facing technology plays like Facebook, Google or Match.com have been surprised by the potential of the region. Why is that the region is a gem and why is it that it is hidden to many?

The challenges are pretty obvious:
‍
Too many Flags. The Nordics consists of four main countries, each with their own flag. On top of that we have Iceland, the Faroe Islands and Åland, also with their own territories and own flags.
Too many Languages. As if Swedish was not complicated enough, then Danish, Norwegian and Finnish are distinct own languages. Complicated.
Too many Currencies. Good news, Finland has adopted the Euro. But Sweden is sticking to their Krona, Norway and Denmark their respective version of the Krone.
Too much Land. The region is 3 500 000 square kilometers big, some 40% larger than the UK.

What is then that makes the region commercially so attractive?
‍
We love the World. Nordic people a curious about the world. We have never been able to rely on the sheer size of our home market, hence we have been forced to develop internationally with IKEA and H&M (then) and Spotify and Skype (now). This also means that we welcome the brands of the world in our home markets.
We love the Internet. If the population density of your home market is low, then the Internet came as a true blessing. The average internet penetration in the Nordic region is at  94% and the highest across Europe.
We love Technology. The Nordic region has a history of technological innovation, from the adjustable wrench, to the pacemaker and the cellular telephony. Its no surpise that Apple claim the region - in absolute terms - to be an absolute key market i Europe.
We love to Purchase. The purchasing power of the Nordic countries outperforms most European countries, as a region the aggregated GDP is no 5 in Europe.
We love to speak English. Being located at the edge of the civilized world, we need to be able to speak and understand the world. International visitors often experience that "everybody seem to speak English", which is confirmed by the English speaking population being at 21 million, only surpassed by Germany and England in Europe.

These are some of the factors that creates an environment for international companies  where the Nordic region out ranks most other parts of Europe. Curious?

We would love to tell you more.

Back To Blog
Our press

We asked our associated partner Patrick von Schenck about his lessons learnt from the past weeks and months. Patrick, educated and raised in the most entrepreneurial environments in the Nordics, is today at JP Cornerstone and responsible for helping Entrepreneurs putting some in place the top talent at the companies of tomorrow. Patrick, a Brit in his soul despite his surname, naturally took on a bit of humorous angle to our question and gave us five essential tips on how to excel in video conferencing.

In maybe one of the more lonely periods in history, finding and maintaining love is of course more important than ever and Philip Jonzon Jarl, CEO of the value based dating app Relate has seen an increased interest in both the app and the now digital events. He has also been kind enough to share his best practise with us, highlighting the importance of regular check-ins but also check-outs, Slack channel for MiTs (most important things) and the app Be Focused.

We continue to chat with great entrepreneurs about what we can learn from the Covid-pandemic in terms of digital practises, both personally and professionally. This time Rupert Dean is on the other side of Zoom. When Rupert started X+why, the praised London based chain of hubs for co-working focusing on sustainability and social entrepreneurship, it was out of a macro analysis: big head quarters and non flexible 10 year leases is not the future. Still very much believing the macro analysis holds, Rupert laughs about the consequence of the quarantine: “Short term we have become a victim of our promise of flexibility”.